Net Ten EOM’s credentials were quickly recognised in his first season at stud at Maple Lane Farm in Indiana in 2014 when he was strongly supported by breeders and left 65 foals. No fewer than 18 of those progeny were winners as two-year-olds. Unfortunately, there wasn’t a champion among them and, in the cut-throat world of standardbred breeding, he struggled to attract mares in the following seasons. At the same time his early crops in New Zealand were showing Macca Lodge’s Brent McIntyre enough to decide to import Net Ten EOM in time for the 2018-19 breeding season.

Net Ten EOM is very closely related to the top racehorse and sire Well Said. Their dams are full sisters

Net Ten EOM is a son of the late super sire Somebeachsomewhere — in fact, he was the first of his stallions to be made available to New Zealand breeders — and is out of the champion Artsplace mare Glowing Report (1:49.2, world champion, Breeders Crown champion and winner of $US2.3 million in stakes).

While breeders in New Zealand may not yet be convinced about Somebeachsomewhere, that’s not the case in North America where he was the champion sire in 2016 and 2017. Significantly, Somebeachsomewhere ended the dominance there of Bettor’s Delight, who is still the leading sire in Australia and New Zealand and did kick back to head the US sires list in 2018. 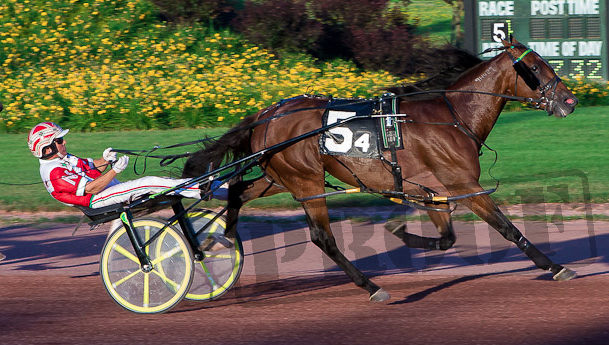 Glowing Report, simply one of the best racemares of all time, is a full sister to Must See (1:52, $US562,000), the dam of top racehorse and sire Well Said (1:47.4, $US2.69 million) and the up-and-coming young Somebeachsomewhere sire So Surreal (who is, therefore, a full-brother in blood to Net Ten EOM).

Injury cut short Net Ten EOM’s promising racing career after just 17 starts. But not before he’d broken 1:50 three times for the mile, posting a best time of 1:49.4f on a half mile track at Pocono.

Net Ten EOM represents a new generation of the Direct Scooter siring line that’s been so successful here, through In The Pocket, Christian Cullen and Courage Under as well, of course, as Mach Three, the sire of Somebeachsomewhere. SBSW broke all sorts of records as a racehorse and proved just as freakish at stud in North America.
Net Ten EOM also has Direct Scooter close up on his maternal line through Grand Lady.

Net Ten EOM — $2500 plus GST on 42-day positive test
$3000 plus GST payment on live foal
Discounts for multiple mares under the same ownership. Contact us for more information.