PANSPACIFICFLIGHT made a big impression with his first two-year-old crop in the United States back in 2010 and six years later some of those horses are still winning. 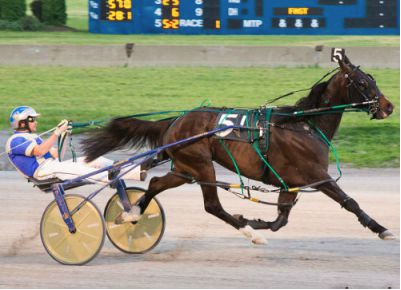 GD Airliner is one such horse. Now an eight-year-old, he won for the third time this season when he took out the feature pace in 1:54.3 at Buffalo Raceway in New York on 28 May.

The durable gelding has had 40 wins and is one of Panspacificflight’s biggest earners with stakes of $US562,000. He has a best time of 1:50.

GD Airliner was from Panspacificflight’s stellar first crop that made the rookie stallion Indiana Sire Of The Year with only two-year-olds racing. Not surprisingly, he was the top stallion the following year, too, with two crops of racing age.

MACCA LODGE were in action at the PGG Wrightson Christchurch autumn sale, outlaying $8000 for an un-named Well Said weanling filly from the Smarty Pants family.

The filly, out of the Life Sign mare Imprint, is a half-sister to Opulent, who won the Group I Caduceus Club Classic as a two-year-old before being exported to Australia. Racing in West Australia as Am Opulent, she’s won a further 14 races.

Half-brother Idealindiamonds has won seven races from just 13 starts for David and Catherine Butt, who also owned Opulent and will get her back to breed from.

John Howe, of Christchurch, bought Imprint for $14,000 at the sale and Kaiapoi breeder Katie Carville paid $16,500 for another of her daughters, Idolise, a five-year-old American Ideal mare.

Imprint is a half-sister to Crackabella, The Fascinator and Giveitawhirlgirl, the dam of dual Group I winner Twist And Twirl, Feels Like Magic (now racing in the United States) and Bettor Give It (the winner of 15 races in Australia).

Well Said is a half-brother in blood to Net Ten EOM, the young Somebeachsomewhere sire represented in New Zealand by Macca Lodge.

PANSPACIFICFLIGHT four-year-old In Full Flight is now two from two from the Ohaupo stable of Jason and Megan Teaz after winning again at Alexandra Park on Friday night.

As a cast-off from the Dickie stable, In Full Flight drew a bit of harness racing media attention with his storming maiden win on 15 April, coming from last and running a sub-56 last half wide on the track.

But this time he showed gate speed to hold the trail before Megan challenged hard for the lead around the bottom bend the final time. In Full Flight was headed in the straight but fought back to win by a head in 2:43.7 for the mobile 2200 metres.

This was a penalty-free win in a junior drivers race so In Full Flight should be hard to beat the next time he lines up.

MACCA LODGE product Bonnie’s Khaleesi will do her winter racing from the Auckland stable of Tony Herlihy at Ardmore. 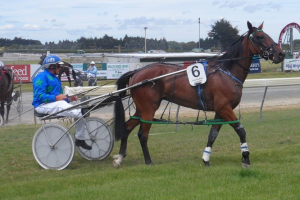 Bonnie’s Khaleesi after her first win at Invercargill in February 2015.

The Live Or Die four-year-old mare has won three races for Tony Stratford in Southland and has looked close to winning form with fourths in her two starts this campaign.

Brent and Sheree McIntyre race Bonnie’s Khaleesi with Brent’s sister Jan Nelson and her husband Wally. She’s a daughter of the Camtastic mare Bonnie Lass who won 10 races for the two couples.

FOOTNOTE: Have a look at our “Macca Milestones” page to see how Bonnie’s Khaleesi’s been doing.

WHEN BRENT MCINTYRE acquired the frozen semen rights to North American sire Panspacificflight a few years back, he knew he was getting a proven sire who would succeed at stud here. But he couldn’t have dreamt how successful his first crop would be.

For a start 20 of Panspacificflight’s first crop of 23 foals qualified (that’s just about all those who survived). Fifteen of them have gone on to success on the track with Bigandme belatedly adding to the record when he won as a six-year-old at Wyndham in March 2018.

By our count these 15 horses, now eight-year-olds, have won nearly 140 races between them. Wow!

Nearly all have now been exported and are still performing well in Australia and now back in the United States where the stallion was domiciled before his untimely death in 2018.

Panspacificflight was already a proven sire in the US before Macca Lodge started importing his frozen semen and he’s now left the winners of $US19 million in stakes there. But in May 2016 there was a Panspacificflight winner in New Jersey with a difference — he was bred in New Zealand.

Wick won five races and nearly $40,000 in stakes for Wyndham trainer Brendon McLellan before being exported. Now, racing as Wick N, he’s won 15 times in the US and took a mile rate of 1:51 at Harrah’s Philadelphia on 01 July 2018.

Across the Tasman, Glenisla has won 19 races, posting a best time of 1:54.8 when she downed the 2015 Southland Oaks winner Smokin Bird at Menangle in March 2016. She now races in South Australia.

Little Rascal, owned by Ian Dobson of Christian Cullen fame, was a premier racing specialist at Alexandra Park (six wins) and Addington (two wins), earning $120,000 before he was exported to Australia in April 2017. He has quickly made his mark there with five wins at Menangle and a best time of 1:51.8 when he beat My Field Marshall in a Group III race in September 2017.

BREEDER ALERT: Little Rascal and Southern Pursuit, who won four races from the Clark Barron stable before being exported to the US, are both out of Live Or Die mares.  They’re the only two progeny bred on that cross from Panspacificflight’s first two crops here. Broodmare Romola Hanover features in the pedigree of both Panspacificflight and Live Or Die.

Probably the most remarkable story from the first crop surrounds Panspacificflight’s first New Zealand winner, The Manipulator. Sold at the yearling sales to Auckland trainer Tony Herlihy, he had issues and ended up back where he started — at Macca Lodge. There he responded well to horse chiropractor Tommy Behrns and won on debut in the spring of 2014. Such was his promise that he was sent to the All Stars stable in Canterbury where he won once more before breaking down. He came back in 2016 to win two more races before he broke down again. That looked like the end of his racing career but after roaming around on a riverbank on breeder Neil Timms’s property he went back into work at Macca Lodge. The Manipulator had been going fair races until he put in a winning front-running performance at Gore in August 2018 and has since notched another win, his sixth, at Winton in September.

BREEDER ALERT: The Manipulator is out of the Presidential Ball mare Luckisaladytonight. Panspacificflight has clicked extraordinarily well with PB mares in the US, where the 10 foals bred on that cross have won an average of $US96,000 and four have gone 1:55, including big winner Paco Labrook (1:48.4).

The multiple winners from the first crop include Little Rascal (19 wins), US winner Wick (20), Southern Pursuit (11), The Manipulator (six) and Arden’s Concord (11). Panspacificflight isn’t available in Australia and his good winners there, like Glenisla (19 wins) Last Flight In (13), Sir Mac’s Man (eight), Straight Thru Blue (nine) and Wattlebank Flyer (20) have all been bred here.

THE TIME-HONOURED New Zealand Oaks at Addington this weekend is the next target for Panspacificflight filly Arden’s Choice, who finished a creditable fourth in the Group I Nevele R Fillies Final on the same track on Saturday.

As expected, the All Stars Stable dominated the three-year-old fillies’ feature with Dream About Me winning from Golden Goddess and Piccadilly Princess in the national record time of 2:18.1 for the 1950 metres.

Arden’s Choice was drawn perfectly behind the hot favourite Golden Goddess, who used her gate speed to lead early before handing up to Dream About Me. That pushed Arden’s Choice back to three back on the fence and she lost little ground on the hotpots in a last 800 metres run in 55.9 with a final quarter in 26.6.

THE MACCA LODGE colours were back in the winner’s circle at the Forbury meeting on 13 May when Panspacificflight three-year-old filly Concorde Dawn won at her eighth start.

Driver Nathan Williamson got her around to the lead from a second line draw and she toughed it out to post a time of 2:46.4 for the 2200-metre mobile. She cut out her last quarter in 28.7.

Just two races earlier Tony had won with Deceitndesire, who was recording her second win for the Maccas Slackers Syndicate — consisting of staff at Macca Lodge — since they leased her in the spring. In nine starts for the syndicate, she has also had three third placings.

Dexter Dunn found the gaps he needed to get the Bettor’s Delight mare home in a 2700-metre standing start race after being three back on the fence.