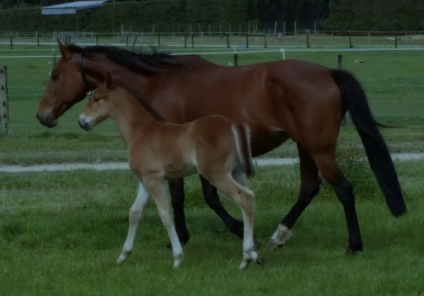 THE MACCA Slaccas they call themselves, but they’ve been walking around the stables with a spring in their step after syndicate horse Deceitndesire rolled home at Forbury Park on Sunday.

“It was a bit of a surprise,” trainer Tony Stratford says. “We thought she’d go alright but she actually won quite easily.”

The Macca employees leased the Bettor’s Delight mare only three weeks ago and she was having just her second start for them at Forbury. Dexter Dunn hunted her to the front from her outside draw in the 2700-metre standing start before taking a trail behind the favourite and sprinting up the passing lane for a comfortable win.

While Tony’s the official trainer, there are five unofficial ones — the other syndicate members, Tony’s partner Dawn Wilson, Caine McIntyre, Serenity O’Connor, Alison Jackson and Mark Gutsell — who are no doubt all claiming a bit of credit for the win.

The TAB must have taken a bit of a hammering on fixed odds. Deceitnsdesire opened at $35. We’re not sure what the bookies closed her up to at the finish, but there was quite a bit of punter interest and, in her first show of form, she ended up paying just $11 on the tote.

Deceitndesire is the third winner for the syndicate after they enjoyed success last year with One Christian and Euromaxx.

THE RED ROBBER became Panspacificflight’s first qualifier from his third crop — now two-year-olds — when he contested the Gore trials on 14 October.

Owned by the McIntyres, he’s a full brother to the speedy Sir Mac’s Man (who raced as Mac’s Man here), the winner of four in Australia with a best mile time of 1:57.5.

The Red Robber has been put aside to develop.

Another to qualify was the three-year-old Panspacificflight filly Concorde Dawn, who became her sire’s 10th qualifier from 32 foals in his second crop.

Panspacificflight had an impressive 19 qualifiers from his first crop of 23 foals, now four-year-olds, and he needs just one more of them to win to boast a 50 per cent winners-to-foals record.

WATCH OUT for the new Macca Lodge colours this season. All going well, they’ll be seen in the race the stud is sponsoring during Cup week in Christchurch.

They’re navy blue with emerald green sleeves with the Macca Lodge logo on the front and back. Replacing the blue with green stars, they were first worn by junior driver Craig Ferguson behind Bonnie’s Khaleesi at Gore this month.

She finished fourth first-up for the season and will race next at the Riverton meeting on 01 November.

With a bit of luck Bonnie’s Khaleesi, last season’s Southland Three-Year-Old Filly-Of-The-Year, will then contest the $20,000 Macca Lodge-sponsored South of the Waitaki race on Show Day at Addington. It’s a 2600-metre mobile for C1 and C2 pacers. Eligible horses must have been registered with a southern trainer as at 01 August.

FOOTNOTE; Horses trained at Macca Lodge who are not owned by the McIntyres will continue to race in trainer Tony Stratford’s own colours. 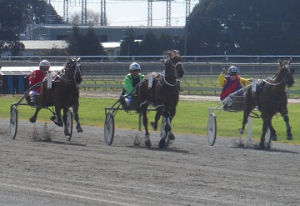 IMPRESSIVE two-year-old qualifier Mucho Macho Man could be heading for the Young Guns series in Auckland at the end of the year.

The son of Mach Three and the unraced Bettor’s Delight mare Alisa is another horse in the Macca Lodge stable owned by Kenny Baynes. She’s out of the Ferndale Star breed of his late father Colin.

Ferndale Star was one of the Hokonui Stud’s cornerstone mares and Colin named some of her progeny after his son back in the 1960s and 70s — Kenny Charles, Young Kenny and later on Sir Kenny, who all went on to race in the United States. She also left the good winners Moonshiner and Sly Brewer as well as fillies in Hokonui Star, Gentle Miss and Taxi Dancer.

Taxi Dancer was the dam of NZ Free-For-All winner Tax Credit back in 1988 but the family hasn’t been prominent in the past couple of decades. Mucho Macho Man, who is from the Taxi Dancer line, could be about to change all that.

FOOTNOTE: Kenneth Charles Baynes was himself named after a horse — Young Charles, the sire his father stood at stud, who left none other than the mighty Young Quinn.

THREE-YEAR-OLD filly Envious will make a poignant return to racing at the the Gore Harness Racing Club meeting on 10 October.

She’s owned by Jo Calder and her partner Kenny Baynes, a son of former owner-trainer, breeder and administrator Colin Baynes, who died in Gore this week. He was 94.

Envious is trained at Macca Lodge by Tony Stratford.

LITTLE RASCAL, arguably the best performed of Panspacificflight’s first New Zealand crop, resumes in a $20,000 race on premier night at Addington on 09 October.

The Robert Dunn-trained four-year-old gelding has drawn No 1 on the front line in his first standing start. That mightn’t be ideal but he has been beginning well at the trials. He zipped over his last 400 metres in 26.2 when he won at the Ashburton trials on 29 September.

Little Rascal has done most of his racing from Dunn’s northern base, winning all four of his races at Alexandra Park, where has recorded impressive winning mile rates of 1:56.9 over 2200 metres and 1:59.6 over 2700 metres. But he stayed in the South Island after running in the Jewels at Ashburton. He’s owned by Ian Dobson of Christian Cullen fame. .

Another talented Panspacificflight pacer down to race this weekend, Arden’s Concord, has been scratched from his Gore engagement. Trainer Matt Saunders says he’s not 100 per cent and doesn’t want to risk him.

FOOTNOTE: Little Rascal lived up to his name in contributing to the shambles at the start of this race. He finished up being put to the unruly position but blew the long-delayed start anyway. Back to a mobile the following week, Little Rascal rattled home for fourth from a bad draw over 1950 metres and will be worth following during Cup week.