BACK IN 2003 Brent McIntyre took a neighbour along to a promotional evening in Southland for a new North American stallion shuttling to New Zealand.

They both bought tickets in a raffle with the prize of a free service to the horse concerned, Mach Three. And, you guessed it, the neighbour, Steve Sloan, held the winning ticket.

He didn’t have a broodmare at the time, but he borrowed Holmes Hanover mare Elleuro from his brother and got a filly from the mating called Mach N Elle. Brent took a half share and trained her at his Tussock Creek property. Mach N Elle didn’t win in eight starts but was good enough to run second on debut as a two-year-old and fifth in the big Cheviot fillies race at her next start.

Brent took her first foal, a Bettor’s Delight colt, who was born at Macca Lodge. Named Darcee, he was sold to clients of Tony Herlihy’s stable at the national yearling sales for $32,000. The four-year-old had the biggest win of his career in the $23,800 North Island Country Cup Final at Palmerston North on 16 April, taking his record to six wins from 18 starts and $61,000 in stakes.

Mach N Elle has proved to be a shy breeder. A year after foaling Darcee she left Machjagger (by Justa Tiger), a winner for Brett Gray this season, but has not been back in foal since. 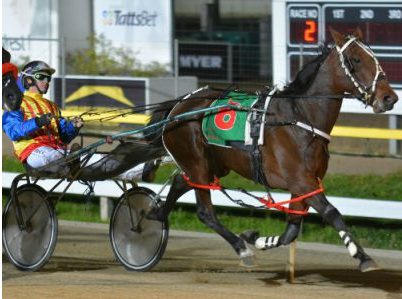 THE CLARK BARRON-trained Southern Pursuit furthered the fine start Panspacificflight has made as a sire in New Zealand when he qualified at the Invercargill trials on 08 April 2015.

The three-year-old gelding became Panspacificflight’s 19th qualifier from a first crop of just 23 live foals — a startling 82 per cent. It’s understood that at least two of the four horses not qualified have died.

Clark went on to win on debut with Southern Pursuit at Gore on 27 April.

Here’s a list of all Panspacificflight’s qualifiers (with the race winners highlighted) from his first crop: