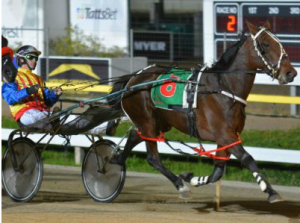 FORMER SOUTHLAND pacer Last Flight In posted the fastest winning time of Panspacificflight’s progeny down-under with a win over a mile in 1:53.8 at Menangle in Sydney on 29 September.

The four-year-old mare, who won her only start for Clark Barron before being exported, has now won five races from 15 starts in Australia. She won three races in Tasmania before transferring to Kevin Pizzuto’s stable in New South Wales and was driven by former New Zealand junior driver Jack Trainor. (Pizzuto is serving a nine-month suspension for his drive in the race that Smolda was controversially beaten in at Menangle in May).

The previous fastest winning time by a New Zealand-bred Panspacificflight was the 1:55.5 time of Glenisla at Newcastle in February. Glenisla, who was developed by Tony Herlihy at Ardmore before being exported, has had seven wins, more than any other Panspacificflight progeny in Australasia.

Outstanding filly Arden’s Choice ran 1:53.5 when she was second to Dream About Me at the Jewels in Ashburton in June.

THE BREEDING season is just about upon us again and we’ve been getting a pleasing number of inquiries for Panspacificflight and Net Ten EOM. Their books are still open.

We’ve been getting really good feedback from the TESTMATING feature on the website.

While most of the mares will be served here at Macca Lodge, we want you all to know that we do provide frozen semen from both these sires to other studs throughout the country.

This means that you do not have to send your mare to Southland to be served by Panspacificflight of Net Ten EOM.

PANSPACIFICFLIGHT three-year-old filly Sally Maclennane is heading to South Australia this week after being sold by the McIntyres of Macca Lodge. She won a maiden race at Gore in August.

THE INTERNATIONALISATION of the breeding business through the shuttling of stallions and the transfer of frozen semen can take a lot of the guesswork out of assessing “new” sires here.

Take Panspacificflight, a proven sire in North America before his frozen semen became available at Macca Lodge in 2010. As we’ve already noted, he’s closely related to a clutch of highly-performed racehorses and stallions by the champion sire Artsplace, including Art Major.

And if you look at Panspacificflight’s North American record you’ll see that he has crossed well with Artsplace mares. Their 25 foals have won an average of $US32,500 with Tyber Tyke (1:50.2, $US265,000) the best of them.

He has gone even better with mares by Artsplace’s son Artiscape, the dam sire of Arden’s Concord. Nine foals have been bred on this cross in North America with average earnings of $US47,000.  Pacific Sun Rae ($US320,000) has been the standout performer.

But the striking thing about Panspacificflight’s North American record is how well he has crossed with Presidential Ball mares. There his 10 foals out of PB mares have won an average of $US96,000 and four have gone 1:55. The best has been seven-year-old Paco Labrook (1:48.8), from his first crop, who has won 32 races and $US570,000. Even taking Paco Labrook out of the equation leaves this cross with impressive average earnings per foal of $US43,000. 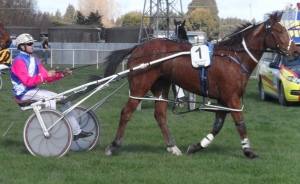 The Manipulator . . . bred on the hot Panspacificflight-Presidential Ball broodmare cross.

So it’s no surprise, then, that one of the best horses from Panspacificflight’s first crop here (and his first winner) is bred on this cross. The Manipulator, with two wins and two seconds from five starts, was a highly promising three-year-old in the All Stars Stable before a knee injury cut short his season in the autumn.

He’s out of the good racemare Luckisaladytonight, one of only three Presidential Ball mares to produce a Panspacificflight foal here so far.

All of which suggests the many mares in Southland by the Presidential Ball stallion Washington VC would be a good match with Panspacificflight.

Again, the evidence is very promising. The only foal out of a Washington VC mare in Panspacificflight’s first crop is Last Flight In, who won on debut for Clark Barron in Southland before being exported to Australia where she’s doing a good job for her new owners. Originally in Tasmania but now in New South Wales, she’s won another seven times and taken a 1:53.8 mile rate at Menangle.

Other strong pointers are emerging from Panspacificflight’s first crop.

He was bred to only two Live Or Die mares and they’ve both produced good horses — the Alexandra Park specialist Little Rascal and Southern Pursuit, who’ve won 11 races between them.

Holmes Hanover is also to the fore with his daughters producing Panspacificflight progeny Wick and Glenisla, who between them have won 15 races here and in Australia. Winning three-year-old filly Julia Lady and Ansett Flight are also out of Holmes Hanover mares.

The best of Panspacificflight’s progeny here, three-year-old filly Arden’s Choice, is out of an In The Pocket mare.

HARDY CAMPAIGNER Ultra Shok has been sold out of Tony Stratford’s Macca Lodge stable and will do his future racing in the United States.

The Julius Caesar seven-year-old won $43,000 in stakes from his 61 starts with seven wins, seven seconds and five thirds. He has been in career best form this season with two wins and a second from four starts.

Ultra Shok, out of the Holmes Hanover mare Elleuro, is a half-brother to the dam of Darcee.

ARDEN’S CONCORD provided sire Panspacificflight with his fourth win of the new season when he won over 2400 metres at Winton on 06 September.

Junior driver Rory McIlwrick gave the four-year-old gelding a perfect run in the one-one sit and he powered away to win by two lengths in 3:04.5 in wintry conditions on an easy track. The leaders ran their last half in 59.5 with the final quarter in 29.5.

This was Arden’s Concord’s second win from just five starts and a penalty-free one so he’ll be hard to beat wherever he lines up next.

We’ve already pointed out how strongly Panspacificflight featured in last season’s sires statistics. Well, click on the link below and see how he’s going at this early stage of the new season. Note that his four wins have come from just 71 eligible foals (including his two-year-old crop) whereas all the stallions above him on the premiership have at least three times as many foals.