Macca Lodge is delighted to announce quality sire Raging Bull will join its stallion roster in the 2020-21 breeding season.

Proprietors Brent and Sheree McIntyre secured the royally bred son of Christian Cullen with one thing in mind – to give breeders precisely what they have been asking for – an affordable stallion that can produce top-line horses.

Raging Bull will stand at the highly competitive fee of $2000+gst in his debut season at Macca Lodge.

“We are excited to have him here because he can leave really nice foals,” Brent said.

“He has left some good horses, so breeders are going to get real bang for their buck at $2000.”

One of Raging Bull’s biggest attractions is that his pedigree offers breeders the best of both worlds.

By siring great and champion racehorse Artsplace, San Sophia has been an incredible producer, with eight foals of her foals winning more than 70 races. 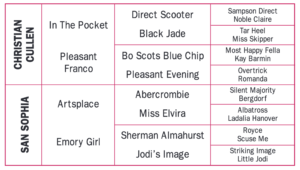 Raging Bull comes to Southland soon after leaving one of the province’s most exciting pacers in recent seasons.

Wildwest turned heads when winning on debut at Winton by an incredible 12 and a half lengths for trainer Lauren Pearson and driver Brent Barclay.

The 4yr-old was quickly scooped up by Perth buyers before going on to win his next seven consecutive starts from Gary Hall Snr’s star stable.

After his seventh consecutive win, Wildwest’s driver Gary Hall Jnr made the astonishing statement that the pacer was the second fastest horse he had driven.

Which is an incredible rating given the fastest is another southern-bred in three-time Interdominion Champion, I’m The Mightquinn.

Group 3 winner Our Bare Knuckle, USA flyer Princess Holly and talented northern pacer Eastanbull are among the many talented types Raging Bull has left during his short stud career.

The sire was destined to be a racetrack star himself had his career not been cut short by injury.

At 3yrs-old, he went on to win twice and run close up second placings in the listed 3yr-old Northern Stakes, group 2 Elsu Classic and the listed Yearling Sales Series Final.

After his 3yr-old season was cut short by injury, Raging Bull returned at 4yrs-old to produce a win before bowing out with a second placing behind Miracle Mile winner Christen Me.

Though he missed out on the track, Raging Bull is giving himself extra opportunities in the racetrack through his fertility.

Macca Lodge had brilliant success with the stallion, getting nine of ten mares in foal last season